Food banks are not new, nor news. Commenters on all sides are quick to point out that they first sprang up under the last Labour government, but the need for them has increased dramatically since the introduction of the bedroom tax in April, and harsh sanctions for benefit claimants. The latest figures from the Trussell Trust show that demand for food banks is still increasing. In George Osborne’s ‘war on welfare’, the only casualties are those at the very bottom. But this is not a war. It is an assault against the unarmed, a massacre of hope and dignity.
Edwina Currie recently commented that she had “no sympathy” for food bank users, that they were just “rational” opportunists. I attempted to point out that food bank users had to be referred by a health visitor or social services or other agency for help, but she refused to hear it. 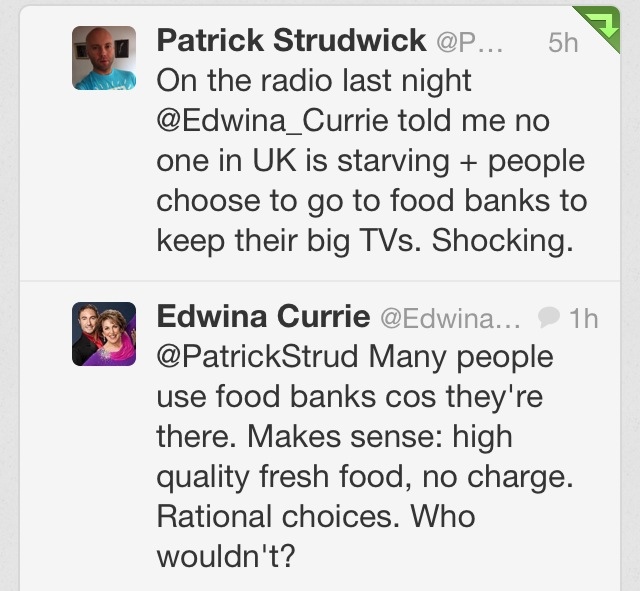 Currie isn’t the only senior Conservative to perpetuate the myth that they are all just turning up to fill their boots with a few cans of dented tomatoes and a couple of black bananas – Lord Freud controversially stated that the demand for food banks was only so great because the ‘free food’ was there in the first place. Michael Gove blames feckless parenting and household financial mismanagement. I doubt any of them have been to a food bank and spent half an hour asking people why they are there.
Food banks are often the only port of call for some of the hardest to reach members of society, people who wouldn’t ordinarily ask for help, or for whom the thought of visiting their local council office to query why their housing benefit has been delayed or suspended is another thing on a to do list wracked with anxiety, instead stuffing the letter into the pile of final demands and bailiff threats.
In response to this, many food banks act as signposting organisations, with agencies on hand to offer help for the issues that led them to the door in the first place. There is practical help, such as courses for job skills, cooking classes, and recipe cards handed out for low cost nutritious meals. There are also child and family support, domestic abuse specialists, and benefit and debt advisers.
At the Conservative Party conference earlier this month, I was asked to address whether food banks were a good thing or a bad thing.
At the same event, an MP in Cambridgeshire stated that there were ‘only 565 food bank users in Cambridge’ justified as he mentioned the population of 82,000 people in his constituency – but what use are numbers? There’s ‘only’ half a million food bank users in the UK. Less than one per cent of the population. But what use are numbers, when you are one of the 565, not the other 81,000 or so? What use is a one per cent chance, when that one per cent is you? What sort of a society do we live in where people who go out to work every day to provide for themselves and their families cannot afford to do so, but their situation is justified in a statistic? Why was he not ashamed, that there are five hundred and sixty five people in his constituency that cannot afford to feed themselves and their families?
The existence of food banks, and the wide array of people that they reach and problems that they seek to resolve, is evidence of neighbourhoods coming together to meet a desperate need for over half a million people in the UK. It is evidence that there is still an element of community in an increasingly isolated and isolating society.
But the need for food banks, in one of the richest countries in the world, is a devastating testimony to the inequalities in our supposedly developed and forward thinking country. While the rich enjoy tax cuts, the poor are turfed out of their homes to pay for it. When the rich enjoy marriage tax breaks, the poor won’t even be able to afford the ceremony. While discussing worldwide poverty and hunger at the G8 summit earlier this year, our Prime Minister tucked into fillet beef and violet artichokes.
Is it just me, who thinks that this has been going on long enough? That food banks are no longer a shocking indictment of inequality, but have become almost normal? Because there’s nothing normal about a family in work that cannot afford to put food on the table for their child. There’s nothing normal about needing to beg for food. At the Conservative Party conference, one Tory peer called for an urgent all-party parliamentary enquiry into food banks. I just hope Currie, Freud and Gove are invited.
Jack Monroe. Twitter: @MsJackMonroe.