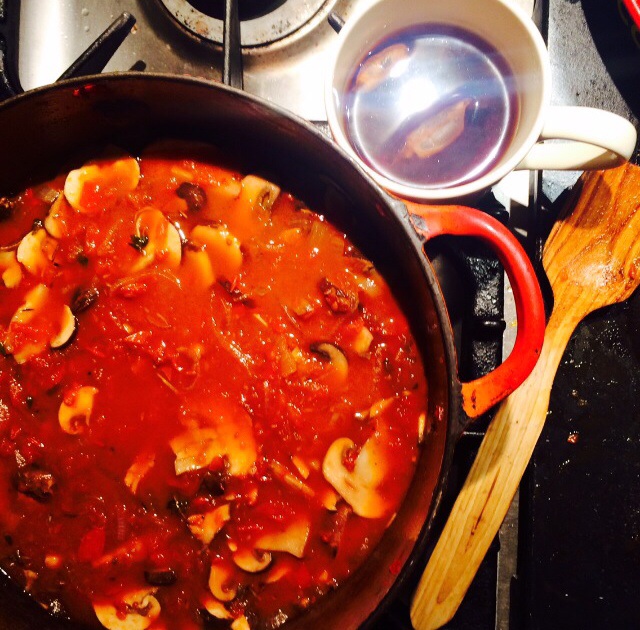 Mushroom and Tea Bourgignon-that’s-not-a-bourgignon-at-all. Tea in stew is one of my favourite discoveries so far this year. I’m so happy I could do a cartwheel, but I was never very good at those.

Now don’t freak out, but here’s a recipe for tea bourgignon. Like bourgignon for tea, but a little more exciting. The pedant in me thinks I can’t exactly get away with calling this vegan heap of deliciousness a ‘bourgignon’, given that it doesn’t have any beef or wine in it, but the rebel in me is shrugging her shoulders and recalling the hundreds of recipes I’ve cooked so far on this journey that deviate deliciously from their traditions and origins, and besides, ‘mushroom stew’ just doesn’t have the same oh-no-she-didn’t ring to it.

For a while now, some of my readers have been asking what they can replace wine with in my recipes; either they don’t have it, or it’s too much of an outlay to go and buy a bottle just to use a splash here and there (and if anyone understands that, I do!). Well, my science head said one day that maybe strong black tea would give the same effect, and then by happy coincidence someone suggested it on one of my recipes a few days later and sealed the deal. Tonight, with a glut of mushrooms escaping all over the vegetable drawer, I decided to make a bourgignon, and just as I reached for the wine I remembered – TEA! And it’s a very, very happy discovery indeed. I can’t wait to use it in lots of other recipes now!

Of course, it’s not the first time, I made a banana and tea curry a while ago that made it into my second book, but that was as a flavour of its own, not replacing my beloved red wine. This, this use for it, is just divine. And so much cheaper. Oh, I love a bargainous discovery.

First boil your kettle and find the largest mug you have. Pop a teabag in, and fill it to the top with boiling water. Let it stand to one side to stew, properly stew, while you do the next bits.

Peel and finely slice your onions, as thinly as you can – when one of my friends taught me to make curries many moons ago, he told me to chop the onions so finely that eventually they melt into the sauce with a long slow cook; it’s a principle I apply to most stews these days. Your onions might not vanish, but that’s okay too, mine don’t always. Not all onions are created equal.

Peel and chop your garlic, and toss into a large pan with the onions. Pour the oil over, stir, add a pinch of salt and bring to a medium heat. Cook for a few minutes, stirring occasionally, to soften the onions and lose that raw acerbic edge to them.

Pour over the chopped tomatoes and stir in the puree, and add the herbs. Remove the teabags from the mug and pour the strong black tea into the pan, and give everything a stir.

Slice your mushrooms and toss those in too, then bring it all to the boil. Once boiling, reduce to a simmer and cook for at least 20 minutes to let the sauce reduce and thicken and all the flavours meld together in a super delicious way.

The next bit is up to you. You can leave it simmering away for another half an hour in the traditional fashion, or you can turn the heat off, pop a lid on (or large plate or tin foil if you don’t have a lid) and let it slowly cool down – it will carry on cooking itself with the heat trapped inside, but cost you less in gas or electricity to achieve pretty much the same effect – it just won’t reduce as much, so you’ll need to strain some of the liquid off to serve, or eat it like a soup, which is equally yummy.

Season to taste, and serve. I like mine slopped onto white fluffy rice or a pile of mash, but if you’re a low carb person, a pile of spinach or steamed greens would be yummy too.

To make it go further, you could sling a can of cannelini beans (or rinsed off baked beans) into it when you put the mushrooms in, which adds a hit of protein too, for people who worry about that sort of thing.

I calculated these recipe costs at Sainsburys based on my most recent shop. Other shops sell onions and mushrooms so check out what’s available near you. Prices were correct at the time of blogging but those sneaky supermarkets put them up all the time. If you find any Super Brilliant Bargain Prices on any of these ingredients then comment below, as my readers and friends love a bargain and it’s nice to share.