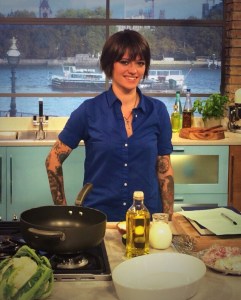 Hi, I’m Jack Monroe, and this is my website, Cooking On A Bootstrap, where I share original recipes that I have created, carefully costed from major supermarkets, to encourage people to cook at home, and to cook simply, cheaply, and incorporate more veg and plant-based foods on a budget.

I started writing this in 2013, originally as a local politics blog with a few recipes in it. One post – Hunger Hurts – went viral, as I described the anguish of being a single mother, with delayed and unpaid benefits, looking for work, in Britain. I did an interview with the Sunday People who offered me £200 to ‘tell my story’, and at the time, I had my gas being threatened with being cut off, had sold almost everything I owned, and was desperate for money. I said yes to the interview, thinking I would pocket the cash, pay some bills off and be able to buy my son a Christmas present.

That’s not what happened. In the sidebar of that article was my weekly shop and some recipe ideas, which led to me being offered a cookbook deal by Penguin. I needed a job, and what they were offering was essentially a job, so I took it. Life has not been the same since, and I am now writing my 4th cookbook, Vegan On A Bootstrap.

It hasn’t been plain sailing; as a freelancer and still single parent, I still watch my food budget very carefully, and continue to work with people in

I write about food-related issues as well as create recipes, and am often seen popping up on TV or on the radio to discuss topical issues. Highlights so far include Rip Off Britain, Inside The Factory, Question Time, Sunday Brunch, Saturday Kitchen, Countryfile, BBC Breakfast, Sky News, a Sainsburys advert, a Samsung advert, Daily Politics, and many, many more.

I have campaigned with and support the Trussell Trust, Oxfam, Child Poverty Action Group, Plan Zheroes, The Food Chain, Stonewall, MaziMas and many other charities.

I have won several awards over the years, all surprising and humbling but very nice all the same, and they are dotted around my modest home as doorstops and bookends and the like, including the Fortnum & Mason Food and Drink award, Red Magazine ‘Red Hot Woman’, Marie Claire ‘Woman At The Top’, Women Of The Future media award, Woman Of The Year, the YMCA Courage and Inspiration Award, a Diamond Jubilee Community Champion award and several others.

I hold two Honorary Doctorates, from the University of Essex and Coventry University respectively. My work has been studied in GCSE English Literature, and my recipes are taught in Home Economics classes, childrens centres and food banks across the country.

I think that’s everything, and I hope you enjoy the site!